Merlin Young - gentle and effective acupuncture for everyone

Some famous Japanese acupuncturists whose work influences my approach to treatment:

Yoshio Manaka was a surgeon, who became fascinated with the traditional theories of acupuncture. After years of private research and practice, he developed an effective and versatile form of Japanese acupuncture therapy - one which is especially suited to the culture and times in which we live. He was also one of the first Japanese to introduce Japanese methods to the world outside of Japan.

Kobe Akabane was also influential in the dissemination of acupuncture out of the East Asia in the 1950s, influencing both German and English practitioners. He was a modifier of traditional theory and an innovator in his own right.

Kodo Fukushima was a pacifist in the 1930s, during a hyper-militarist era in Japan. He was enlisted as a soldier and lost his sight in action in the Sino-Japanese war. Subsequently, he studied acupuncture under some of the most gifted masters of the day, and through the 60s and 70s he refined and formalised the most delicate non-insertive needling techniques which have become known as Toyohari.

Toshio Yanagishita was a recent inspirational president of the Toyohari Medical Association. He was particularly admired by all in the association for his skill, his thoughtfulness, his compassion, his humility and his humour. He also had an amazing capacity to communicate complex ideas in ways which made them immediately understandable. 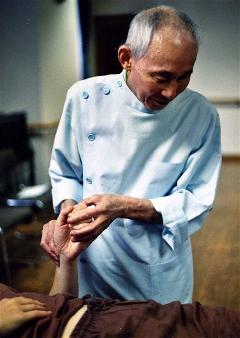